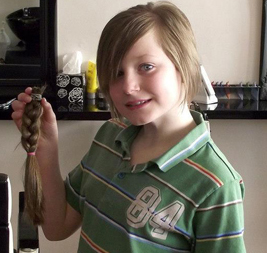 Not only did she collect sponsorship but she also donated her beautiful long hair to the Little Princess Trust - a charity that makes wigs for little girls that have lost their hair due to illness.
Kaitlin was touched by the work we do here at the Ally Cadence Trust and wanted to do something to help us, especially as her mum is good friends with founders Emma and Karl Humphries, who lost Ally to SMA in the March of 2009
We are all so proud of Kaitlin for doing something so brave to help two charities.  It truly takes someone special to take such a big step at such a young age.  Thank you Kaitlin, you are a star!
Total Raised: £597.25
18 May 2013
< Previous